Generally, in terms of Science of Economics, we term a recession is there when a general slowdown in economic activity is seen in a country over a sustained period of time. During recession, production, employment, investment spending, capacity utilization, household incomes and business profits fall drastically. The badly affected industries try to make a balance of their financial viability by cutting off the salary and wages, shutting down their production units or putting a short break to avoid pile-up of stocks etc. In this process, many jobs are put to an end suddenly putting the concerned families to the brink of hunger. To save the economy, governments usually respond to recessions by adopting expansionary policies, such as increasing money supply through increased government spending/subsidies, special assistance, as bail-out packages, to those industries that may help to regain the economic health and decreasing interests/duties and taxation.

Most economists believe that recessions are caused by inadequate aggregate demand in the economy, and favor the use of expansionary economic policy during recessions. Some of them would favor the use of expansionary monetary policy, while others may advocate increased spending by the government to spark economic growth. Some economists may suggest tax cuts to promote business capital investment. But those economists who favor Laissez-faire may simply recommend that the government not interfere with natural market forces. But the Governments have to come in the picture to save those families who are affected badly with the downturn of the economies.
Today, the world economies have been so dependent on each other that the impact of recession in US is well experienced in India and China too. Most of the States are doing their best to save themselves, sometime adopting too protectionism, as an insidious evil. It is equally dangerous. For global stability, it is essential that self-interest by them should be put aside at the earliest. A failure to do so and reach common agreement risks plunging the world into prolonged recession. The Great Depression appears to have extended due to a 1933 meeting of nations failing to adopt a co-operative approach. Instead it ended in recriminations which led to protectionism. This way, history is reminding us of the consequences when nations fail to work together. All the Governments are under obligation to do every thing possible, more cooperatively with each other, to ameliorate the effects of the global recession since no nation can deal with this crisis on its own and risk increased social and political unrest in developing nations. The effectiveness of every Government’s domestic action to deal with the financial crisis depends on the recovery of global growth. Unemployment now stands at its highest rate since 1983, and February was the third straight month that payroll job losses exceeded 600,000.
For reducing the impact of the recession, some governments are hostile towards economic stimulus packages, whereas some others are endorsing as part of the approach to the global financial crisis. It is estimated that the stimulus packages around the world so far had spared 19 million people from the unemployment queue. The IMF said the actions had been 50 per cent more successful because they had been coordinated. It appears that some countries would do more as required. They need to allow further stimulus, purging toxic assets from banks, support developing countries by enhancing the resources of the International Monetary Institutes and ushering in global financial regulation and strict monitoring of hedge funds.
But we should not see towards the Governments every time for solution of our problems. We too need to come forward to cooperate it, to support it where it is proper track and to oppose vehemently if that is going wrong. Although today the global economy is somewhat better than during the periods of recessions history has so far witnessed earlier than the present one, spending on food accounting for a little less than a tenth of a typical family’s disposable income wouldn’t hit people in the stomach as it happened earlier when people were taking dried corn meant for animal feed out of the granary and sifting dirt out of it to make corn bread.
A study found that while women may be more vocal about their anxiety, men suffer more because much of their identity is tied up in their job. Not only do men worry more when they’ve lost their job, they are often are unable to feel mentally well unless the job they have is secure. At a time when no one’s job is safe, men are quite vulnerable to feelings of hopelessness. Unfortunately, if you decide you need professional help to cope with your feelings, you may have some difficulty getting it. So many people are seeking help that many therapists are finding themselves totally booked. Many employees are taking advantage of their benefits to get help dealing with their fear and sadness about looming layoffs. Sometimes these feelings express themselves physically, as fatigue, muscle pain, apathy, dizziness or stomach problems.
Some executives are taking the recession particularly hard. Facing staggering financial losses, they have turned to suicide. Why so? They must analyze if they have not taken necessary action before hand to do make advance planning for meeting such an eventuality/emergency. 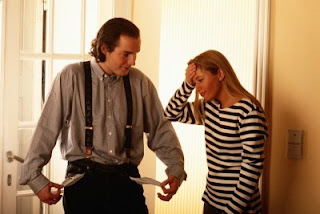