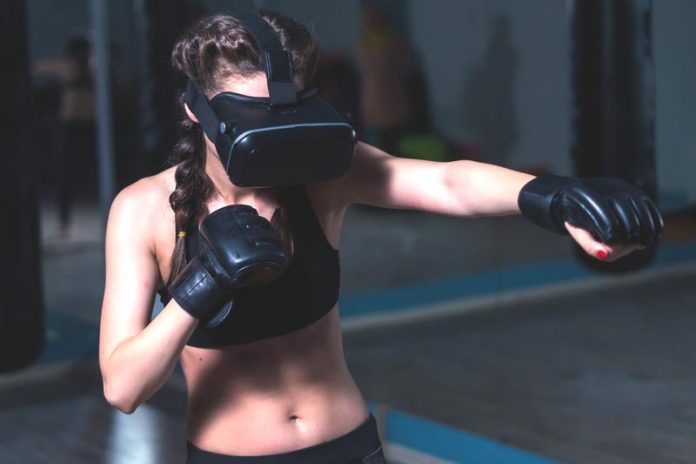 At Home Exercises Made Exciting with VR : Most people that exercise regularly can be split comfortably into two groups; those who like to work out in the gym, dedicated spaces or outdoors and those who prefer to exercise out of public view, at home. While both offer their pros and cons, it’s those who exercise at home who often struggle to remain motivated and keep up an optimal routine for exercising.

If you’ve been struggling to find the inspiration to keep your home exercise routine motivating and exciting, consider stepping into the world of Virtual Reality and how it can change your work out for the better!

What is Virtual Reality?

Virtual reality, as the name suggests, is a platform that supports users entering a completely digital world. It’s immersive, exciting and can see you visiting the moon in one moment while taking the form of a free-flying eagle in the next. Virtual reality, while originally a concept for the gaming world, has taken the entire world by storm and is being used in all sorts of applications from medical training and engineer practice to creating incredible, 3D artistic masterpieces.

How Can You Use Virtual Reality to Exercise?

There are many avenues that you can explore when using virtual reality in your exercise routine. Whether it’s investing in a complete virtual reality set-up that allows you to move through the digital landscape and enjoy beat and rhythm games such as Beat Saber and Audioshield. Or, simply making use of the virtual reality headsets to transport you to a new world while on the treadmill or home exercise bike.

Building a complete virtual reality set from scratch can be expensive, especially if you need to buy a desktop computer that has enough resource to run virtual reality as well. If you are starting out in your exercise journey and are considering virtual reality as your motivator, consider visiting a VR workshop where you can try out different equipment to find out what would best suit you in your available budget. You can also pick up cheaper home gym equipment, such as second-hand treadmills or refurbished exercise bikes. PlayStation VR is one of the most cost-effective compared to quality VR sets available on the market, however HTC Vive will provide more immersion and a greater control over movement in the virtual world.

While the previously mentioned rhythm games offer a basic to intense work out depending on your chosen level of difficulty and will certainly get you sweating, these games weren’t intended solely for exercise, instead getting people moving to their favourite music. Dedicated exercise games are available across numerous virtual reality platforms and include;

Winner of multiple VR Fitness Game awards, Box VR is a boxing game that will get you moving, twisting and sweating as you work-out to exciting electronica beats. It has a Oculus comfort rating of ‘Intense’ meaning there is plenty of head and body movement and may not be suitable for those just getting started in VR exercise.

Imagine dodgeball but played in virtual reality and you’ve got Sparc! Throw, dodge and block your opponents’ balls as they fly across the course giving you a full upper and lower body work-out. Play against AI or your friends and make your exercise sessions social from the comfort of your home!

Another award-winning VR fitness game, Swordmaster is a dedicated first-person combat game that allows players to move as much or as little as they want. Block with your sword and shield for an upper body work-out or make use of the dodging moves to exercise both upper and lower muscle groups.

Relight your motivation for exercise and find a virtual reality game that caters to your tastes and works the muscle groups that most benefit you!

Related Videos about At Home Exercises Made Exciting with VR :

How to work-out in Virtual Reality

How to Have a Thrilling Workout With VR

At Home Exercises Made Exciting with VR